Posted by Tamas_Harangi in Uncategorized | 0 Comments

The trailer for the new video game I worked on as a writer and creative consultant is now online. Brotherhood is Ubisoft’s new entry in their hit Assassin’s Creed game series that won numerous awards, including “Best Action/Adventure Game,” from IGN, “Best Action Game”, “Best PS3 Graphics”; from GameSpot and GameSpy.

Post-Production Continues on The Pier

Having dragged Sachin and Dylan out for six mornings to catch the sunrise at Venice Pier, our little short film finally wrapped yesterday. 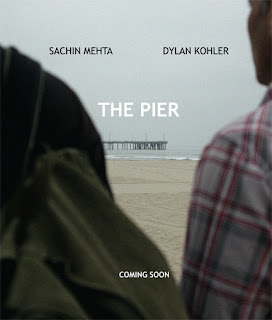 Now in the editing phase, The Pier is scheduled to debut on my site soon. Check back or hit our RSS for updates.

View from the Bandwagon

I jumped on the bandwagon. I had to. Cannon made me do it. They practically forced me to join the HD SLR frenzy.

In my defense, I was on the lookout for a new digital SLR camera that would give me some decent pics but wouldn’t set me back too much. Just as I was doing my research, Cannon made the announcement of the EOS Rebel T2i. A digital SLR with a 24 frame High Def video function for under $800.

To put that into perspective, nine years ago, the hot new image acquisition device was Sony’s first 24 frame HD camcorder, the F900 which sold for upwards of $100,000 with a decent lens. Although true techies will argue with me on this, at first sight, this Cannon actually produces a better image than the F900 ever did. So, as you see, for that bang for the buck, I had to jump on the HD SLR bandwagon.

I’ve been putting my T2i to the test as both a still and a video camera, having shot my new short The Pier with it. Here are some of my initial reactions; my first views from the bandwagon if you will:

1. It IS a still photo camera. A pretty good one at that for the money. With 18 mega pix, it’s the still cam I needed for regular use with the video functions as an insane bonus to filmmakers, compared to what you would have gotten less than a year ago.

2. You gotta outfit it for video use. A range of aftermarket products exists to make this baby more suitable for videographers. The best ones are made by a company called Zacutto and can run you much more than the camera costs. But a very reasonable setup can be put together by utilizing just their pistol grip and their basic viewfinder — an absolute must. With these additions, shooting video with my T2i became quite comfortable. As a matter of fact it took me back to the days of shooting my first Super 8 shorts with a Chinon camera sporting a pistol grip and a fixed angle viewfinder.

Cannon SLR outfitted with Zacuto gear. The pistol grip with the viewfinder does the trick, but as you can see, you can keep adding goodies if you want.

3. The “Look”: 24 frames/sec 1080p HD video from a CMOS sensor the size of a 35mm movie frame. Though there is room for improvement in the recording codec and compression, we would have killed to have this five or six years ago for ten times the price. But more on the “Look” later.

4. HD SLR seems ideal for shorts and student films, but its handling and interface shortcomings would become very old very quickly on a feature shoot. Monitoring is an either-or between an external monitor and the camera’s own LCD display, and sound recording is really for reference at best.

5. All of the above will be a moot point in a year or so.

Why? Because by next year, every manufacturer will have caught on and there will be a line of cameras designed specifically for filmmakers that will sport the same “Look.” 24p 1080 on a 35mm size sensor will become commonplace. That “Look” everyone was bending backwards to achieve just five years ago will now be the de-facto feature on a range of low cost camcorders.

This “Look” I think will finally put an end to the digital revolution that started ten years ago. It will finally settle the misconception that any of this technical stuff really makes a difference. What separated good movies from absolute crap 15 years ago was not 35mm vs. 16mm, and 10 years ago it wasn’t film vs. digital. It was always script vs. script and artist vs. artist.

The one thing that keeps going through my head as I look at the footage coming off my T2i is: “Dammit, now I have to get better at writing… again.”

The Chinon 60XL — the same model my first short films were shot on.