Posted by Tamas_Harangi in skepticism | 0 Comments

How an ill researched news article turned me into a card-carrying rationalist. 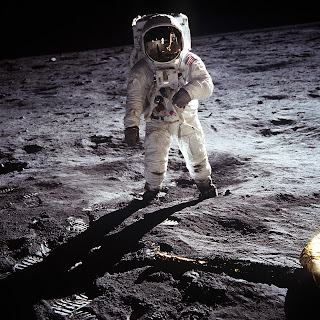 It all started innocently enough. On June 20, 2009 I was perusing the web in a fit of procrastination when I came across an article commemorating the 40th Anniversary of the Apollo 11 mission and Neil Armstrong’s historic “one small step” in 1969. I was on CNN.com, a news source that’s infamous for their determination for presenting both sides of any argument regardless of how baseless, disingenuous, or flat-out asinine any one side may be. In true CNN fashion, this article was about the claims that the Moon landings 40 years prior may or may not have been faked (far be it from CNN to take a side in this “debate”). I was relatively uninformed about this controversy at the time. For some reason I thought that claims of mock-Moon-sets on vast sound stages in the Nevada desert died a long time ago, but I guess I was wrong. So here I was reading about the possibilities that the world was bamboozled by a set of elaborate special effects put on by NASA at the order of Richard Nixon.

There was only one problem with this claim that I could clearly see, and that was because, unlike conspiracy theorists and CNN anchors, I actually spent some time studying special effects and their history throughout cinema, along with basic photography and optics. In 1969, eight years before the premiere of the original Star Wars (the visual effects of which, on the original non-retouched print, look quite dated) we actually had the technology to send men to the moon, but not the capacity to realistically fake the footage they brought back. The only way to fake the massive amount of footage generated by the Apollo missions was to send a crew to the moon to film it. (I’m not talking here of the ten second clips people like to show on YouTube, I’m talking about the ten minute continuous shots of 16mm footage that conspiracy theorists conveniently forget about. )

But this CNN article was just ill researched enough to send me on a Wikipedia fueled fact finding mission which eventually landed me on BadAstronomy.com, the all things science and space blog of the best selling author Phil Plait.
Plait, an astronomer by training, has burnt some calories in his day debunking moon conspiracy claims and other pseudo-science, eventually turning his blog posts into his bestselling book, Bad Astronomy. As I found out, he is also among the leading voices of the skeptic movement on the web.

By “skeptic”, I mean the empirical sense of the word, described by those smarter than me as “a practical, epistemological position in which one questions the veracity of claims lacking empirical evidence”. For a space enthusiast like me, it was Phil Plait’s blog that ended up becoming a gateway drug to the online world of skeptic activists, covering a wide array of topics from UFO’s (no proof), alternative medicine (not working), and of course god (not there). I guess the thought process of skeptics was always something I skirted without knowing exactly what it was or where I truly stood with it. But once it was defined and refined for me by the likes of Richard Dawkins, Sam Harris and the Mythbusters, skepticism as a world view became hard to kick. Unfortunately, it also has a way of turning a fellow into a social outcast.

Take for example the common conversation filler of horoscopes and astrology. Just about every dinner chat about relationships or career matters will eventually involve someone throwing out a “well, she is a Gemini so she’s hard to figure out” or a “my boss is a typical Sagittarius.” I used to give little mind to this before, never truly believing in the veracity of horoscopes, but never arguing with them either. However, after one becomes a card carrying skeptic, these types of utterances cause a different reaction. Once you spend some time reading about the prevalence of astrology in popular culture and contrast it with the amount of scientific evidence pointing to it being complete hogwash, it’s hard to stay silent when a polite dinner conversation turns to events caused by “Mercury being in retrograde.” One feels bound by a certain skeptic code of honor to speak up and become the stick-in-the-mud who points out that, for example, no, there aren’t more accidents during a full moon, and I do have the numbers to prove it.

Speaking up becomes the skeptic’s burden in a sometimes seemingly futile effort to move us toward a society governed by reason.

And nobody could use a resident skeptic more than CNN. The next time some seemingly paranormal event is caught on camera — such as the “Mystery Rocket” this past week — it would be great to have at least one news source where an anchor could look into the camera and simply say “Well, we don’t know what this is folks, but I’m sure there is a perfectly reasonable explanation.” Because at the end, there always is.

A cursory Google search tends to disprove mass emails, hoaxes, and canards, but for some people, reality is way too biased to be of use.

I got one of those e-mails the other day. You know which ones I’m talking about. The mass forward kind from that one guy on your e-mail list who seems to hit forward almost as a Pavlovian reaction to news of doom and gloom which may or may not be government induced. He felt compelled to inform me that NASA, apparently, issued an acid rain warning because of a dark circle around the Moon. It sounded pretty astonishing so I did what I usually do when I get one of these e-mails, I ran a Google search, and low and behold, the first result — not the tenth, not the second, the first result — said: “Acid Rain hoax”. The link was to one of my favorite sites, Snopes.com, the internet clearing house for sorting through e-mail cons, pranks and fabrications. In the old days, the wild-west days of 2002, before I knew about Snopes, I sometimes had to spend up to a grueling four minutes to disprove a hoax e-mail with a Google search. But now, with the help of Snopes, an inquiring mind can do it in under 60 seconds. Snopes is the Sgt. Joe Friday of the internet, it gives you “just the facts, ma’am”. (BTW, Sgt. Friday never actually said those words on Dragnet. It’s a bit of an urban legend. Wanna know how I know that? Snopes.)

So, the big question remains: Why? Why do I still get these mass forwards? Why do I have to listen to regurgitated e-legends from the same people, years after I told them about where to find the evidence disproving their tall tales?

The answer was provided to me by one of these, no doubt forward-happy, netizens just a few days ago as I was perusing the comment section of Huffington Post. The subject had to do with the “Birther” phenomenon, a movement that keeps Snopes quite busy nowadays. When someone on the HufPo board brought up evidence presented on Snopes that disproved any birther claims, one commenter — let’s just call him Mr. Birther — declared Snopes a “Liberal Plant Site.”

I found that response absolutely fascinating, given that Snopes spends the same effort disproving lies about Sarah Palin and George Bush as it does with Barack Obama. They present independently verifiable facts and evidence to their claims. But what happens when independently verifiable facts come up against an ideology? In this case, how does Mr. Birther disprove a simple fact? Well, by calling it not a “fact” but a “liberal plant.” Easy. Case closed. Hit forward and it’s done.

Take this disconnect and ad a 24/7 news channel feeding into it, then a couple of radio hosts echoing it and you end up with a country where a good chunk of the population is living in a parallax view, where “facts” and “evidence” on one side are mere talking points to rebuff for the other side. To them, freedom means the ability to declare that 2+2=5, if 5 means they’re right. And anyone who says otherwise is just a liberal plant, including the media.

It’s a thought I need to wrap my head around. The knee jerk reaction of forwarding an e-mail of dubious validity on one side, might be met on my side with a knee jerk reaction to send someone a link from Snopes to shed light on its claims, but in both cases this seems to be a useless exercise amounting to nothing more than political agitation. As Stephen Colbert said “reality has always had a liberal bias” — and some people cannot be bothered by anything that’s so biased.